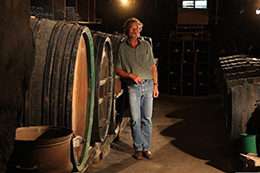 At a (not so) recent organic and biodynamic wine tasting hosted by the French Trade Commission in Vancouver, Canada, Jean Bourdy, an unassuming French winemaker with an orange tinged moustache that might curl up at the tips if grown long enough, is holding court. From Jura, France, a cool climate wine region between Burgundy and Switzerland known for its distinctive and unusual wines, Mr. Bourdy is surrounded by a small crowd that has gathered at his table – all waiting to taste his range of rather captivating wines.

Or at least this is what I hear.

I nodded and got started. Counterclockwise, right to left in the ballroom of the hotel that was hosting members of the Vancouver wine media and trade.

Another acquaintance comes by to say hello.

“There’s a really interesting winemaker in the corner table. Wines from way back to 1952.”

“Really. A whole range of wines. You should make sure you taste them.”

When yet a third person mentions his wines as a way of hello, I look over again. The crowd has gotten larger. I decide to head over, and dart into a space left temporarily vacant by someone evidently fed up with waiting for a pour by Monsieur Bourdy, who does not seem to have rhyme or reason in the order of his pours nor who he pours for.

I wonder aloud if he’s pouring reds or whites. Somebody from the crowd helpfully offers that he also has yellow wines.

“Yes,” says Monsieur Bourdy, holding up a dark, round vessel reminiscent of a bottle of medicine from days past, and without the familiar long neck and sloped shoulders typical of a wine bottle. The year 1952 is clearly marked on its side. “When it’s the Savagnin grape, it is yellow, not white.”

Among its distinctive wines, Jura is known for the Vin Jaune or Yellow Wine made of the savagnin grape. Deep gold, it’s a dry white wine that tastes and smells like dry fino sherry – nutty, spicy, interesting! – getting its character from being matured in a barrel under a film of yeast known as voile. Unlike sherry however, it’s not fortified. The finest vin jaune from the best vintages will last for 50 years or more.

Monsieur Bourdy had a row of about ten wines side by side. Now, inched up close, I could see that you were to taste them left to right – should you be so lucky to get a pour of each from the enigmatic winemaker, who resembled more and more a mad scientist to me. All those strangely shaped bottles, some more like chemistry flasks. They didn’t seem to be arranged by colour or vintage. By body weight and intensity, perhaps?

“Je veux essayer…” The voice from the crowd trails off. He doesn’t remember how to say what he wants.

I would like to try the next wine. Would, not want. One never knew if Monsieur Boudry would indulge. Plus, it was just good manners.

When I ask Monsieur Boudry if has an agent in Vancouver – many didn’t and this tasting was an opportunity for winemakers to meet agents – he says, deadpan, “Many agents wanted to sign me right away.”

Who wouldn’t? Half the room was now crowded at his table.

“But I will take time to choose,” he finishes. Smart man.

I now know that if I stay to taste the whole lineup with this crowd, I’ll risk missing some of the other tables with our allotted time of three hours. I risk it, as Monsieur Boudry takes his time, picking and choosing who’ll get the next pour, and from which mystery bottle. More people try to dig up their high school French to get his attention.

This time, I’d said the correction out loud.

“You just said you were dead.”

Guy-to-my-Right gets testy. Mr. Boudry steps in. “Yes,” he says with a weighty French accent. “Je suis fini means you are dead.”

Guy-to-my-Right glares at me, and then leaves abruptly. Evidently, I’d become the French language Nazi.

At first, I feel badly. I didn’t mean to scare him away, but correct grammar is important, don’t you think? I scour the room to find him later, make nice. Blame an old French teacher’s zeal to rid any native English speakers of the dreaded anglicismes. Then I realize that I am one person closer to tasting the whole lineup of wines. I also notice that there is only one more pour of the 1952 left. I need to focus. I hold out my glass.

The 1952. It’s… interesting. I ask those around me how they would describe Monsieur Bourdy’s wines.

Monsieur Boudry had all or our attention. I think he might have yours as well. Vancouver would do well to have Jean Bourdy’s wines.

*Jean Bourdy’s wines (Bourdy Rouge 2008, Bourdy Blanc 2008, Cremant de Jura NV) are now available through Sedimentary Wines at private liquor stores in Vancouver. As it happens, they are currently taking special orders for the wines below. Both links will give you more detailed information about his wines, as will www.cavesjeanbourdy.com.